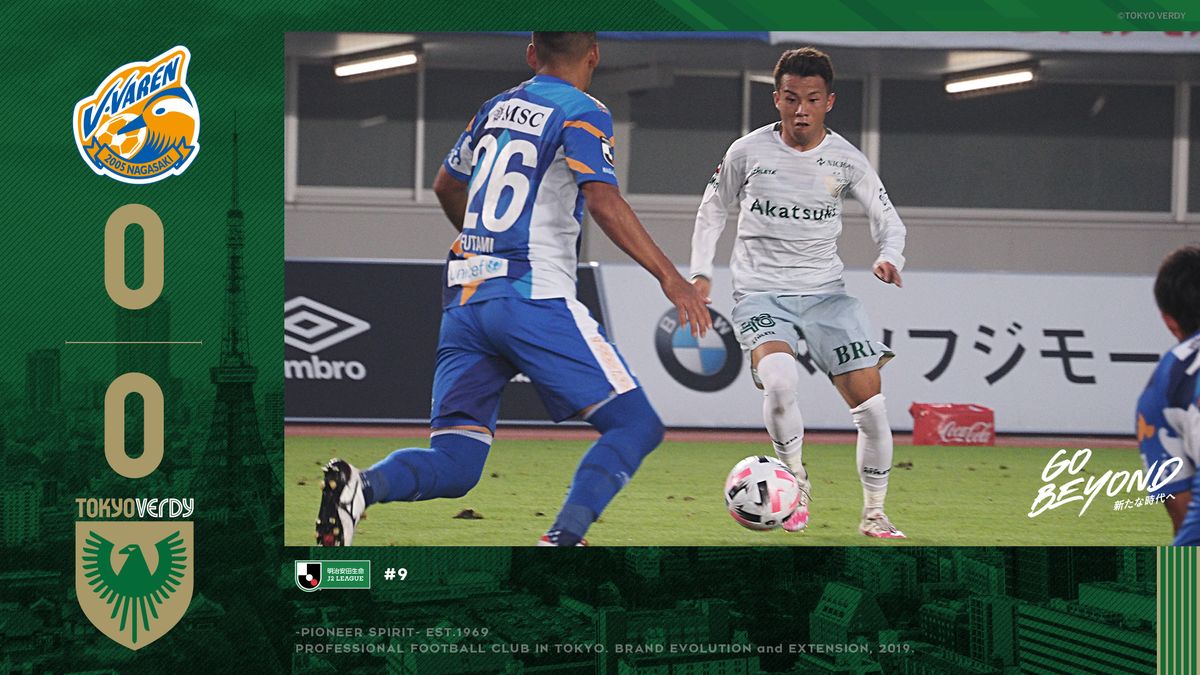 With consecutive matches occurring with little rest in-between and two consecutive draws at home, Verdy have endured a frustrating period. In the last of their three matches this week, Verdy embarked on their first away game in a distant location this season by traveling to face unbeaten V-Varen Nagasaki. Out of concern for the players’ condition amid the heavy schedule and the future consecutive matches that await, the starting lineup on this day featured some changes. Takayuki Fukumura was chosen in place of Yuta Narawa at wide striker, while Koki Morita got his first start of the campaign in place of Yuhei Sato at front central midfield. Lastly, Jin Hanato, who had started every match since the resumption, was given a seat on the bench and replaced by Ryoya Yamashita, who in turn made his first start since the team’s match against Tochigi SC.

As Japan emerges its rainy season, it was hot and humid in Kyushu from early morning and at the time of the 6:00 PM kick off, the afternoon heat was still present and the players could be seen breathing heavily as the match progressed. Both teams suffered from the cruel conditions.

The match began with both teams pressing, as Verdy passed the ball patiently and pushed into opposition territory, while Nagasaki looked for quick breaks on the counter. The first team to create an opportunity was Nagasaki. In the 10th minute, a low cross was drilled into the area from the right side, after a counter, and the Verdy defense were unable to stop a run to the far post, where a Nagasaki player earned a free header on goal, only to see the shot go wide of the right post. In the 18th minute, Verdy were attacked from the left with another low cross and after a block at the near post, the ball fell into the area with an opposition attacker baring down. However, Matheus was able to extend his arm and punch the ball away. The loose ball was once again picked up by Nagasaki for a shot and this time, Matheus dove sharply to his right to bat the effort away from the target. At this point, Verdy hoped to push back and though they carried the ball into the opposition half and built deep attacks from wide areas, there were no avenues to set up a finish. It was during this period that the biggest chance of the day would emerge.  It was the 27th minute and after building from the back to push up the pitch, Junki Koike received the ball wide on the right and initiated the attack. Shion Inoue called for the ball in the middle and flicked Koike’s lateral pass with his first touch, finding Morita with space in between the opposition defenders. Morita slowed the play for a moment and then poked a reverse pass with his toe as he was closed down. Haruya Ide then made the run onto the ball and his first-time shot made it through the defender’s legs, only to drift just wide left of the goal.

With Verdy looking to control the pace of the match amid the cruel conditions, the manager would play his cards at half time. Sato was brought on for Koike and Hanato for Morita. The team then began the second half intending to pass the ball and probe for openings. In the 56th minute, Ide was bundled over outside the penalty area, giving Verdy a free kick from the left side of the goal. Sato took a direct shot from the spot kick, but his effort went just over the bar. Following that chance, Verdy’s counter-pressing began to prove effective and the players were able to win the ball back after losing it to build a period of sustained pressure. A direct run from Yamashita and a fierce effort by Inoue from a set piece brought Verdy within reach of a goal but still one step away. Meanwhile, the defense dealt perfectly with Nagasaki’s attempts to counter-attack and gave up few dangerous opportunities, which allowed the attackers to stay forward and entrust defending to their rear guard. The biggest chance of the second half came in the 84th minute, when substitute Mizuki Arai received the ball on the left side and laid it off to the supporting Kanya Fujimoto, positioned just below him. Inoue also made a supporting run into the center and played a one-two with Fujimoto that allowed the latter to break into space. Fujimoto then had time to drill a cross into area before he was closed down and Hanato made the run, only to see the ball cleared by a desperate lunge from a defender. In the 91st minute of additional time, Arai ran at the defense and provided an early cross into the box. Hanato found a gap between the defenders and got his head to the ball, but he didn’t meet it well and the shot was off target. The match then closed with Nagasaki using set piece opportunities to pin Verdy into their own half. However, the players had learned their lesson from the previous match and locked down to ensure the shutout. When the final whistle sounded, the result was a scoreless draw.

After the whistle, the players retreated to the bench and several were forced to sit down, unable to hide their exhaustion. As they sat without moving for a short period, their bodies were as wet as if they had just taken a shower. Compared to the relatively low humidity in Tokyo, where the rainy season had lingered a bit longer, the high humidity and temperatures of Nagasaki were a truly punishing environment for Verdy to end their streak of consecutive matches. Amidst that, the manager was able to rotate the squad and get the most from his players physically, easily matching and even outplaying the league leaders. Those positive efforts make the team’s inability to win in these last two matches all the more frustrating. Verdy are now keeping hold of the ball and creating chances to score. The only element still lacking is precision at the end of moves. As they look to give their supporters a full taste of beautiful football, the team now have a one-week interval before the start of a demanding series of five consecutive matches. The summer’s true test of the team’s overall strength, including their finishing ability, has now begun. 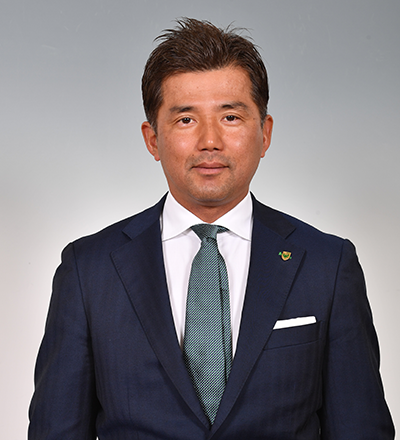 Your thoughts on the match?
It’s a match that has a lot of personal meaning to me. I’m very happy to have had the opportunity to play Nagasaki in this stadium, which holds so many memories for me, and to do it with this system, at this time of the season, and with them being top of the table. With all that said, we came here with the intention of playing our style of football for 90 minutes, right from the opening whistle. However, I think the unimaginable humidity and the exhaustion from their recent schedule left a clear effect on the players. In particular, during the first half, it seemed like we had placed too much emphasis on maintaining possession and building moves from that. Taking into consideration the condition of our players, I think we may have given them too big a hurdle and that is something that I personally regret. In the second half, I inserted Hanato to make a slight change to the game plan and I think we played an excellent game. Even so, Nagasaki are a brilliant team who deserve their place at the top of the table. It was difficult to open them up at the end of moves, but I think the players did very well. I think we should look at the point we got today as a positive and shift gears to train well for the next match.

Keeping a clean sheet against the league leaders must feel like an accomplishment. Given their diverse range of attacking patterns, what did you emphasize in defense?
They involve their side backs in the attack and when they’ve crossed the halfway line, their side halves will drop deep and cut inside, so I told the players to watch out for that. Other than that, the important area was in central midfield. I instructed them to keep a close eye on Caio and Akino. I think our players did that very well.

Do you think the team used too much of their power in defense and not enough in attack?
Nagasaki themselves, as league leaders, are of course a very powerful team, so that might have had an effect. Still, I could sense that the players were tired from the recent string of matches. I think it is excellent that they were able to maintain focus and keep running, especially in terms of our RB plan, which they executed well. 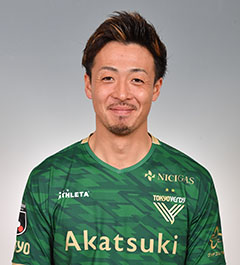 How were you able to hold Nagasaki goal-less for the first time this season?
The credit goes to the team as a whole for the way that everyone was quick to track back after our attacks.

After a tough schedule, you had to deal with the high humidity today.
It was pretty tough, but that’s true for our opponents, as well.

You seemed to struggle with Togashi’s motor when he played as lone striker in the first half.
We did struggle at times, but as the match went on, the two center backs did a good job of controlling him.

While defending a set piece in the first half, the ball seemed to strike close to your arm.
It wasn’t a problem at all. To tell the whole truth, it hit me in the face as well and left me with a swollen tongue.

In the second half, you made some substitutions that enabled you to pin them back more. Did you want to score a goal while you had the momentum?
Either way, we didn’t generate many shots on goal. We have to focus more on getting shots.

This is your third consecutive draw and you’ve given up only one goal over the last three matches. Do you feel the team’s defense has improved?
I feel that the team has matured. Next, we will do our best to get more goals and put ourselves in a position to win. 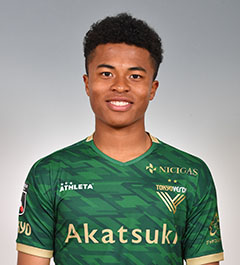 You seemed pretty exhausted today.
Yes, in the second half, I could feel it from head to toe and I finished with a cramp in my leg. Their #40 (Caio Cesar) is pretty strong and he was physical with me from the first half on, so that also wore me out. Still, the recent string of three matches had the biggest effect.

You had identified playing more direct passes as an area of improvement, but your opponents seemed to lock down the center of the pitch today and it was difficult for you.
In the first half, when I was able to get on the ball with space, I could see that Shion (Inoue) was open at the free man position, so I was able to make two or three good feeds. In the second half, when I started to get tired, it didn’t really go well.

Was the lack of shots on goal in the first half because you were too conservative with the ball, the way the opposition defended, or the effects of exhaustion?
We knew that we were tired and while we wanted to end moves with a shot, we decided that maintaining possession was the priority, today. Even so, I think we had the opportunity to take three or four more shots in the first half, so next time, I hope we don’t pass up those chances.